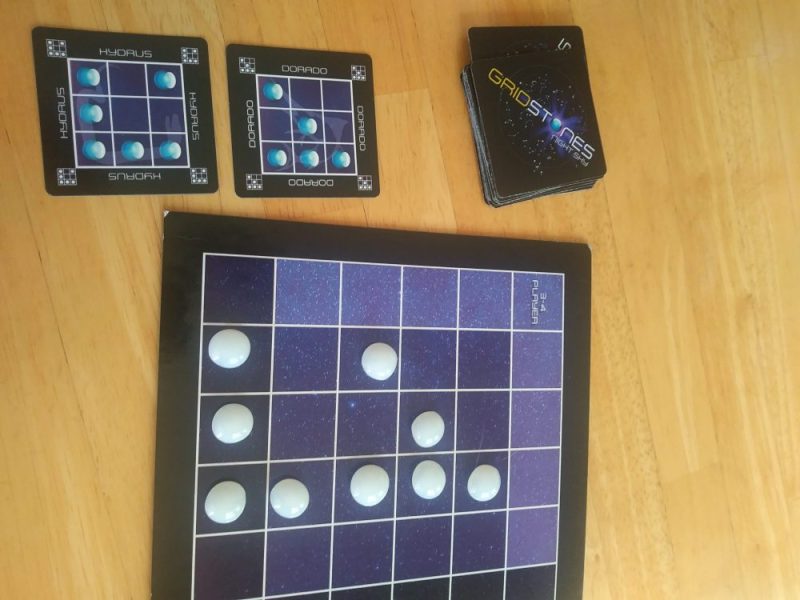 “Oh yeah? Well, if I include one over here, then it’s Aquarius!”

“That’s what you think! I’ll just block out that star, and now it’s Pisces!”

Thanks to CSE Games for providing a review copy! Art and components pictured are not final.

Good abstract games are often praised for the amount of strategy they can create from a simple ruleset, and Gridstones excels on that front. The rule booklet’s only four small pages, including a page and a half of variants. All you really need to know is that you’ll use a different part of the board and a different number of constellation cards depending on player count, and that on your turn, you’ll either add one star stone to the board or remove one from it in an effort to create patterns on the board that match the hidden constellation cards you’re holding. 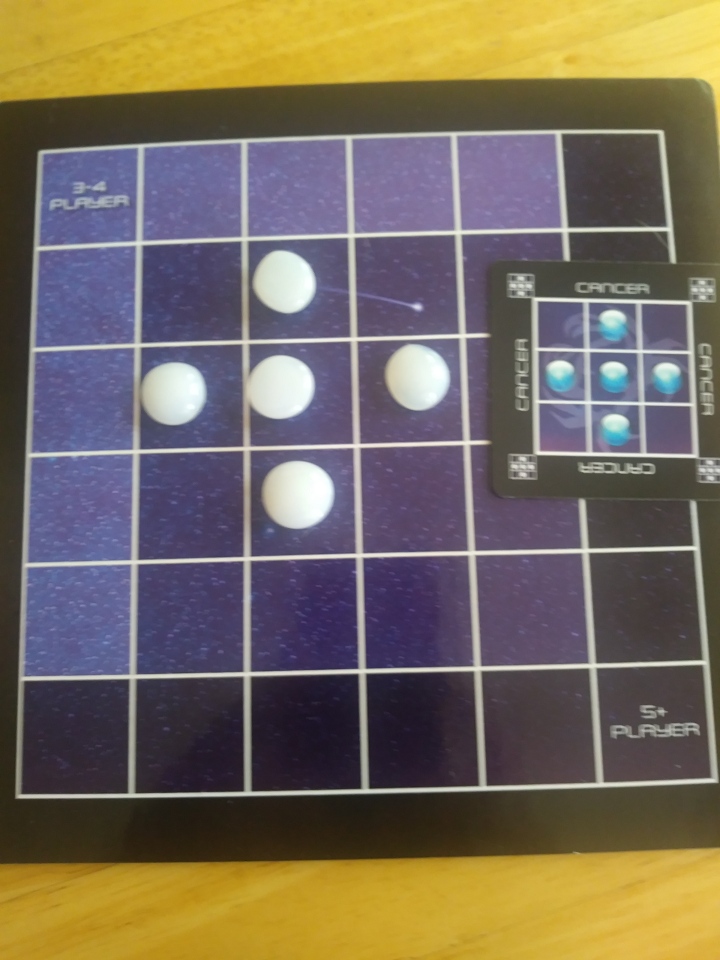 Once you make a match, you place the matching card face-up on the table. When you’ve matched all of your constellation cards, you win. That’s it! But that simple ruleset produces a fun, deep, and intriguing game, and a rare abstract that works well with up to six people. There’s a reason this game has stuck around for 10 years, and this anniversary edition should help more people experience it.

What really makes Gridstones work is that the card patterns show stars and empty spaces on a 3X3 grid, but the actual playing area is significantly bigger; 4X4 for two players, 5X5 for three to four players, 6X6 for five or six players. You also have the ability to turn your cards to any orientation you want, and to make matches before or after you place or remove a star (or both; there’s no limit on how many matches you can make on one turn). So there’s lots of flexibility here to make matches, and you rarely feel locked out.

It’s much more about setting up multiple possibilities for yourself (especially early in the game while you still have all your cards), and about taking advantage of what other people play. And the hidden goals mean that you can’t easily prevent what your opponents are trying to do; sure, you can remove a stone they’ve played (except in the two-player game, where you can’t undo exactly what they just did to avoid stalemates), but that’s not necessarily all that helpful, especially compared to trying to build your own constellations.

This also enables the game to have a relatively similar feeling at different player counts. The larger board with more players means that while you’re getting less frequent turns, there are more areas to expand into and more possible combinations. The board state is going to change more between your turns at higher player counts, but there’s also more room to expand into areas where others may not be focusing. And it’s still very much about building for yourself. But this isn’t a multiplayer-solitaire game at any count; building constellations all on your own would take way too long, so the key is taking what your opponent’s doing and building off it in a way that you can accomplish your own goals. There’s probably more long-term strategy and less reactionary tactics with two than with five or six, but both are involved at any count.

There’s a lot to like about Gridstones, even if you’re not typically a fan of abstracts. It’s an easy-to-teach, easy-to-learn game. And from this corner, it would seem to be easier for new players to pick up and win at than many abstracts, as the hidden and random goals mean you’re not necessarily going to have a huge advantage just from playing this (or other abstracts) more frequently than your opponent.

Now, there is some luck involved, especially with the goal cards. If your constellations are closer to each other than your opponents’ are, or if your constellations are close to what they’re trying to accomplish, that probably gives you a better win percentage. And that may turn off some who only like no-randomness, perfect information abstracts. But the spatial considerations, emergent complexity from simple rulesets, and opportunities for clever moves that often characterize those titles are present here as well, so this may work as a change of pace for abstract lovers too. It seems particularly good as an introductory abstract, though, and especially as one that can accommodate a higher player count. And while the theme isn’t overwhelming, it definitely fits; it does feel like you’re trying to see constellations. Plus, the short playtime means it could be an excellent opener, closer or filler for a game night.

Another advantage this game has is its portability. It’s a small deck of cards, a small board, and a bag of stones, and that makes it easy to transport and play on small surfaces.  It’s fun to play outside under the stars, and the weight of the stones means any wind isn’t going to alter the board, a concern with some games. The patterns on the cards also don’t require a ton of light to see. This is a good camping game, but it’s one that could also work in a bar or restaurant.

There are a few variants here that can offer different options, too. You can play an extended point game (drawing new cards as you play old ones and racing to complete 10 cards), or a series of elimination games (with the last player to complete their cards eliminated each time and the others moving on to start a new game). And you can work in Shooting Star cards, new for this 10th anniversary edition. If you use those, each player gets one during setup, and they give a powerful one-time ability that can be used on any turn, from rotating a 2X2 space of stars to swapping a constellation card with one from the deck, to placing, removing or moving stars. They’re not going to dramatically alter the game experience, especially as you only get one per game, but they can be a fun twist.

Overall, Gridstones is a solid abstract game, and one I’ve definitely enjoyed. It plays quickly and is easy to teach, and it plays well at any player count from two to six. The spatial planning will make you think, but the flexibility in having different goals to accomplish, having a large board to work on, and being able to rotate cards means you generally feel like you’re making some progress. There are also lots of opportunities for clever plays. This one’s worth checking out.

The Gridstones Kickstarter runs through Oct. 5.

The national championship all came down to this. Inside the final 30 seconds, Les’ team was down by a touchdown, but his careful playcalls had put them into position to go for the end zone all in one shot. Would the opposing coach be able to figure out their plan and come up with a defence that could stop it, though? No battle plan survives first contact with the enemy. With Les’ timeout coming to an end, he gulped and called the play…

Hand-Off: The Card Football Board Game

Thanks to CSE Games for providing a review copy!

A big part of the challenge in making a sports board or card game is that there are two somewhat-separate markets out there for it; sports fans who don’t normally play hobby games, and hardcore gamers who have an interest in sports. Thus, companies looking to appeal to both need to find a way to make it approachable enough for new gamers drawn in by the sports theme while still deep and strategic enough to entertain veterans. There’s also the line to walk between providing a quick and simple game or one that accurately simulates the sport in question. It’s a tough balance to find, but CSE Games has done it quite well with their Hand-Off series. They’ve come up with a game that’s easy to get into and play, but one that still has strategic depth and works well as a football simulation. Most importantly, they’ve come up with a game that’s fun. END_OF_DOCUMENT_TOKEN_TO_BE_REPLACED

Eric poured through the reports on his desk, looking out the window at the ships filling up the icy waters of Nunavut’s Ridback Bay. Things were working well for his fleet, with the shrimp and lobster boats both bringing in significant hauls, but now he faced tough decisions about what to do with the profits. Should he invest further in shrimp and lo to try bsterand control those markets? Opt to diversify, branching out into cod, tuna, or king crab? Build a processing fleet to control the next step of production? Or even just buy the dock’s pub to make money off the thirsty returning fishermen? All of those possibilities seemed to provide ample room for profit, but there were his rivals to consider, too. What would they do, and what opportunities would that leave for Eric?

(Note: this is a review just of the base game. I plan to write a review of the Arctic Bounty expansion in the future.)

I picked up Fleet a few years ago on a whim, mostly thanks to its theme. Fishing an unexplored bay in Nunavut sounded like a lot of fun, and was certainly different than anything else I had in my collection. Imagine my surprise to find out years later from the excellent designer diary that this didn’t start with a fishing theme at all, but rather as a game called Imperials, based around continents and cities. In the end, that game would be just fine as well, as there’s a rock-solid engine here that would provide plenty of fun regardless of what the game’s about, but I think the fishing theme actually translates pretty well, and it definitely helps the game stand out. It’s certainly not a theme-first game, or an overly-detailed fishing simulation, but it’s a unique engine-building game that gives you the sense of building a fishing fleet, either cornering one kind of the market or diversifying amongst different fish, and it’s one that provides a high level of replayability and interesting decisions for a low cost, a short play time and minimal table space. From this corner, this is a sure keeper, not one to throw back.

What’s Fleet all about? In a word, multi-use cards, which is a key reason it’s able to deliver such a solid experience without a huge number of components and for a low price. Setup is pretty quick, only requiring giving each player one of each boat card, modifying the numbers of available licenses and fish crates depending on the number of players, and setting the premium licenses further down in the deck. The boat cards you get can be used as boats, captains, or money to pay for licenses and launching boats. The goal’s to get the most victory points, and there are multiple ways to do that. Each launched boat is worth a certain number of victory points (depending on the boat type), and each crate of fish on a boat at the end of the game is worth one victory point. Each basic license you buy is worth a certain number of victory points (depending on type), and premium licenses are worth more (to be discussed a little later). END_OF_DOCUMENT_TOKEN_TO_BE_REPLACED