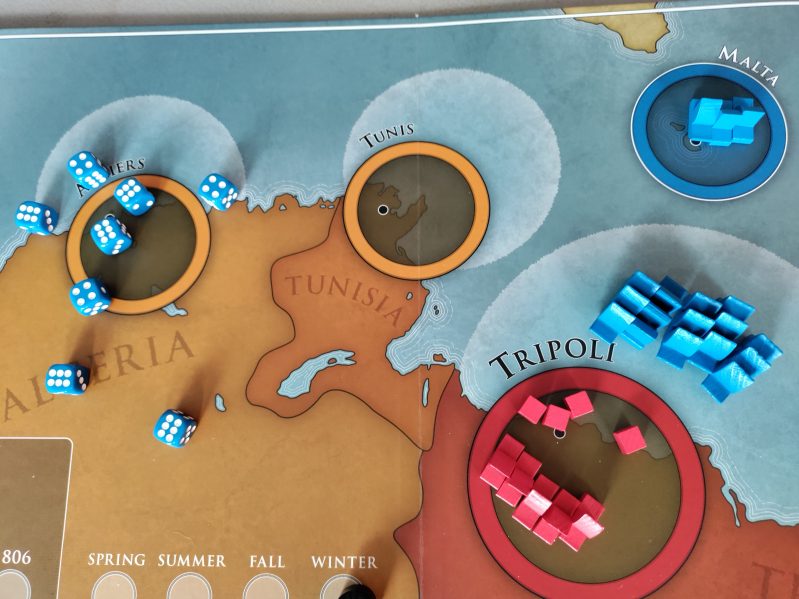 One of my favorite things with historical games is when they get you to really think about what did happen, and why, and what might have happened instead. Back in 2020, I looked at the Battle of Chancellorsville through its Battle Cry scenario. Now, in a similar vein, here’s a look at one particular solo session of The Shores of Tripoli, which I played Sunday morning.

First, a little background. The Shores of Tripoli was first published in 2020, by designer Kevin Bertram through his own Fort Circle Games. It’s a one- to two-player game that takes about 45-60 minutes, as per its BGG page, and that timeframe seems accurate based on my plays. It focuses on the First Barbary War, largely a conflict between the United States and Tripolitania (with some additional involvement from Sweden, Morocco, Algeria, and Tunisia) that historically ran from 1801 to 1805 (although the game can run through 1806).

This is an asymmetric card-driven game, with both sides having unique decks. It takes place over up to six years from 1801-1806, and each year has four turns for each player, divided by seasons. On each turn, the active player will play a card, either for the listed event or as a discard for a basic always-possible action. The U.S. player always goes first. The Americans win either by successfully playing “Treaty of Peace and Amity,” which requires three separate conditions, or by successfully invading Tripoli itself. The Tripolitanians win by gaining 12 gold through pirate raids and card play, sinking four U.S. frigates, or eliminating a U.S. land army.  If neither side hits its conditions by the end of 1806, the game is a draw.

I quite like The Shores of Tripoli, especially for the different stories it tells with each play. The event cards, and when you happen to draw them or how their use goes, do a nice job of illustrating the various possible permutations of this conflict, as I discussed in my segment on this game (and other plays from the January 2021 Armchair Dragoons Digital Convention) on Whatcha Been Playing Wednesday #3).  The components are beautiful, evocative, and functional, and the game has lots of strategy without lots of rules overhead or a long playtime. It also uses “buckets of dice” to good effect in smoothing out probability curves (something discussed by Kevin in a recent Connections Online panel, and discussed by fellow panelist Amabel Holland in a follow-up Twitter thread), which makes reasonable outcomes probable but not certain.

The Shores of Tripoli is available for free online play at Rally The Troops!, and there’s currently a tournament ongoing there. In fact, preparing for my next tournament games (go Team Shadow Dawn, where I’m paired with excellent game designers Sobhi Youssef, Joe Schmidt, and David McDonough) motivated me to dig out my physical copy and take on the T-bot to see if I could improve my U.S. strategies. (The standard two-player game sees one player controlling the Americans and one controlling Tripolitania, but the solo version sees a human U.S. player facing a bot-controlled Tripolitania.) Here’s a look at how that went through photos (an approach inspired by Hiew’s Boardgame Blog):

The 12 cards at the top left are the bot’s event card line and battle card line; the three at the bottom right are the American core cards. The bottom left has the Tripoli deck, with the U.S. hand face down next to it; the U.S. deck and discard pile are at the top right. This photo comes after the first U.S. turn, which saw me play “Naval Movement” to send two frigates to the Tripoli patrol zone and one to the Gibraltar patrol zone. (Normally, the U.S. options are to play a card for its effect, discard a card to move two frigates, or discard a card to build a gunboat in Malta. “Naval Movement” is a better version of discard to move two frigates, as it lets you move up to four frigates.)

One of the key early decisions the U.S. has to make is whether to play the core card of “Swedish Frigates Arrive” or not. This brings the two Swedish frigates (yellow) into the Tripoli patrol zone, where they’ll take part in interceptions of pirate raids, but not battles.

The upside is that this helps provide some early interception before the U.S. gets more frigates out there (the U.S. starts with only three, with one more set to arrive in each of 1802, 1803, and 1804, and two others available from the “Congress Authorizes Action” card). The downside is that this allows Tripoli to play “Sweden Pays Tribute” in 1803 or later, removing the two Swedish frigates and gaining two gold.

It’s not always worth it for the U.S. player to bring in the Swedes, with that decision often depending on your starting hand. In this case, it seemed worth it to me, and it certainly was in this Winter 1801 interception pictured above.

This took place on Tripoli’s turn, with the bot launching a corsair raid. A raid (one of the basic possible actions for both human Tripolitanian players and the bot) sees all corsairs from Tripoli move to the naval patrol zone. All frigates (U.S. and Swedish) then roll two interception dice each, hitting only on a six. Any sixes sink one corsair each, so my above roll (I had four U.S. frigates there thanks to grabbing my 1802 frigate via “Early Deployment” and moving the Gibraltar frigate to Tripoli with a discard after the corsairs there broke out) gave me four hits on 12 dice. That meant only three corsairs survived to raid.

The game progressed from there, with the U.S. building up forces (including the three gunboats in Malta, which are useful in later bombardments and invasions) and Tripoli doing its own buildup and raids. The next critical moment came in the above photo, a Tripolitanian raid in Winter 1803. Here, the U.S. frigates rolled extremely well, sinking the entire Tripolitanian fleet. 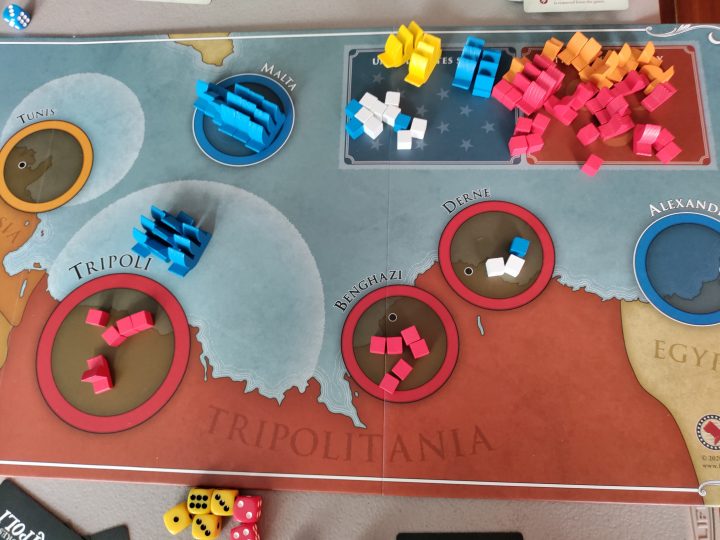 The interception success meant that I didn’t have to worry too much about Tripolitania reaching 12 gold, especially as they hadn’t had a ton of success before that. So the next key thing for me was focusing on my own victory conditions. The U.S. has two potential paths to victory, either successfully playing “Treaty of Peace and Amity” or successfully assaulting Tripoli, and it’s helpful to pick which one of those you’re going to focus on relatively early.

In this case, I targeted the treaty, so I needed to assault Derne. To do so, I moved a frigate to Alexandria in Spring 1804 (it’s ideal to do this late in 1803, but I couldn’t pull that off) so I could play “Hamet’s Army Created” in Summer 1804, then attacked Derne in Fall 1804 with the “General Eaton Attacks Derne” card (which I’d been saving since drawing it at the start of the game). Aided by frigate and gunboat bombardment, I took the city, but at significant losses (the two extra infantry in Derne the T-bot starts with relative to a human player adds challenge). And that further confirmed my plan of focusing on a treaty win, as I didn’t have enough troops left to slog through Benghazi and then Tripoli. (You can attack Tripoli without taking Benghazi by playing “Send In The Marines,” but it’s tough.) 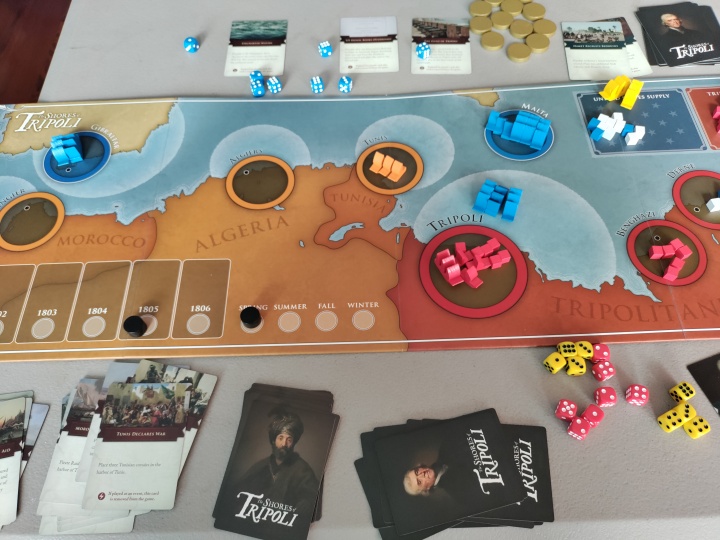 After taking Derne, there are two big issues for the U.S. to focus on in order to get a treaty win: taking Tripolitanian allies out of the fight and destroying the Tripolitanian frigate they get from “Constantinople Sends Aid.” This photo shows the Spring 1805 situation, with Tripoli playing “Tunis Declares War” right before that. I cancelled this with “A Show Of Force,” moving three frigates to Tunis and taking their allied corsairs out. This left not much blocking raids from Tripoli, but the bot didn’t have enough gold or corsairs for that to be a real problem. So that left the frigate.

There are a few potential ways to get rid of a Tripolitanian frigate without the full Assault On Tripoli. One is simply moving frigates into Tripoli’s harbour for a one-round naval battle. But this carries problems from play of “The Guns Of Tripoli” (and/or the Fortress Tripoli variant, which is being used in the tournament and which I’m now using in my regular plays (multiplayer and solo) as well), and also is a challenge if Tripoli has enough corsairs left to soak damage there.

The other path is from an event card. Both “Launch The Intrepid” (destroys one Tripolitanian frigate on a 5-6) and “Burn The Philadelphia” (damages one Tripolitanian frigate to the next year on a 3-4, destroys it on a 5-6) are options here, with “Burn The Philadelphia” being slightly better for these purposes (“Launch The Intrepid” makes up for that with its potential use against corsairs as well). “The Daring Stephen Decatur” enhances either of these by letting you roll two dice and choose one. I used “Burn The Philadelphia” with “The Daring Stephen Decatur” in Summer 1805 and rolled a 6, destroying the frigate.

This would have cleared me to play “Treaty of Peace and Amity” in Fall 1805, the first possible option. However, the bot pulled one of the only cards that could stop me in Summer 1805, “Morocco Declares War.” Fortunately, though, I still had “Tribute Paid” in hand, and the bot wasn’t close to its 12-gold win. So I played that in the fall, and then the bot got a card that didn’t screw things up on its turn, paving the way for my treaty (seen on the board west of Tripoli) in Winter 1805.

As mentioned off the top, one of the things I quite like about The Shores of Tripoli is the way each play tells its own story. That’s been noticeable throughout my tournament games, many of which have followed dramatically different arcs depending on card draw, player actions, and particular die rolls. Of course, it’s not quite as wide-open as some grand strategic scale whole-day games, but there are still six different outcomes here (the three Tripolitanian win conditions, the two U.S. ones, and a draw), and even many games hitting the same outcome have significant differences in how they got there. (Also, this game is appreciated for its full “Historical Supplement and Designer’s Notes” booklet in addition to the rules: this is well worth a read, and both the historical essay from Dr. Abby Mullen and the designer’s notes from Bertram add a lot to the game.)

And, impressively, this is true with solo plays against the T-bot as well. The bot has some predictability compared to a human player (which is offset by the extra resources it gets and its constant availability of its main events and battle cards), but it still has some uncertainty based off its card deck and based off how rolls go. It’s a worthy opponent, and one with impressively low overhead to operate. And it’s a fun way to play this game when you don’t have a human opponent around.